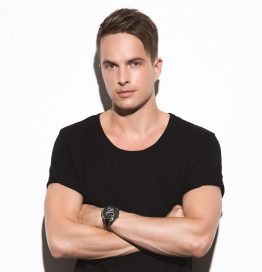 Dannic, the prodigious DJ and producer from Breda in the Netherlands – the hometown of Tiësto and Hardwell – is one of the fiercest acts to emerge from a new generation of Dutch artists, cementing himself as a go-to name that delivers within the world of big-room, grooving house. Bursting onto the scene with a DJ Mag Top 100 DJs Poll placing 5 years in a row as of 2017 with a position that has risen to #61, it’s confirmed to tastemakers that Dannic is a driving force within the scene. Dannic’s long-running stance behind the radio airwaves including his globally-syndicated Fonk Radio venture, also demonstrates a producer that is well and truly tapped into the most vital and important industry trends that appeal to his ever-expanding audience.

From his debut releases on world-class labels including Toolroom and a longstanding relationship with Hardwell’s Revealed Recordings, Dannic’s constant output of dance floor-ready bangers and groove-laden productions continues to excite across live shows globally, as well as productions that set alight the biggest mainstage sets. Seeing the Dannic sound grace the stages of Creamfields, Tomorrowland, Miami Music Week, plus many more alongside the launch of his own aforementioned, independent imprint – Fonk Recordings – Dannic has reflected his musical flair from every angle. From sourcing Demos, A&R’ing, design and production, the first release through Fonk Recordings, ‘Funky Time’, was supported by industry stars Axwell Λ Ingrosso, Fedde Le Grand and W&W, as a swathe of Top 10 releases signified its status, Fonk Recordings also recently hosted a sold-out showcase party of label family and friends during the Amsterdam Dance Event in October – a feat Dannic has now succeeded in elevating two years on the run. As over 350,000 music-lovers descended onto the city, all of these components proved the perfect catalyst to propel Dannic and the future of Fonk Recordings into its next exciting chapter.

After a slew of impressive dates across Hong Kong, Malaysia, Thailand, Japan, Indonesia, China and Singapore, Dannic also returned to Tomorrowland, Ushuaïa Ibiza, threw down sets at the World’s Largest Club Germany’s World Club Dome and played numerous, extensive North American headline dates. Dannic also performed a career stand-out set during the final ‘I Am Hardwell: United We Are’ show at Germany’s Hockenheim, marking the first show that DJs had ever performed at the racing track – but taking his sound to his fans live is one thing, immersing them wherever they are in the world is another. Launching Dannicated at the start of 2017 as a sleek fan portal, Dannic is giving devotees unprecedented access to high-class video content, track streaming and the latest and greatest news in his world, an ongoing project that will be adapted to meet modern and current trends, whilst also staying ahead of the curve.

With his live performances gaining unmissable status, it is clear to see that his vast studio outputs appear just as prolific, making it undeniable that Dannic has moved beyond the tag of “one to watch”. As his unrelenting schedule is interspersed with huge dates across the globe, his high-quality audio weaponry only adds another string to his bow. Take anthems ‘Viper’, ‘Golden Hearts’, ‘Feel Your Love’, ‘Light The Sky’ and big-hitter on Maxximize with ‘Noise’, that also shot to #1 on the Beatport Big Room Chart; all of these factors create a flawless cocktail as Dannic looks forward to a bigger and better 2017, a stand-out release in his career and also a personal highlight for Dannicm includes his long-awaited collab with musical hero and dance aficionado Fedde Le Grand on ‘Coco’s Miracle’ that has dazzled fans everywhere and initiated his exclusive global signing to Spinnin’ Records, an industry leader across dance genres.

Ready to champion Fonk Recordings and its talents no matter the artists’ experience or infancy, Dannic’s musical passion underpins his every move as a DJ for the people, weather this be his noteworthy peers passing praise or his millions of fans around the globe connecting both in the flesh and via a plethora of digital mediums, the scene waits with bated breath for the next move of this shining Breda producer…