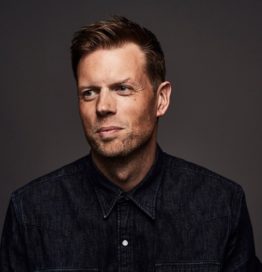 For Scottish producer and dj Kevin McKay it all began one hazy night at the end of the eighties in Glasgow’s infamous Sub Club. “I’d never heard music so inspiring,” he enthuses. “I was amazed at how you could get so hooked on a groove. All these records that sounded so normal at home yet became infinitely more powerful on a big system.” The music hitting him from the speakers came courtesy of Slam’s Stuart McMillan and from that moment on McKay became a bona fide house music addict.

Throughout the early nineties McKay suffered all the classic symptoms of the vinyl junkie. Endless hours idling in record shops checking out anything and everything, blowing any food budget on the latest Frankie Knuckles twelve and guaranteed no sun tan due to days off spent behind a pair of Technics 1200s.

It paid off. Soon he was holding down regular spots in Glasgow clubs like the Tunnel, Sub Club and the Volcano as well as guesting in Edinburgh, Aberdeen and Inverness.

Things didn’t really take off until he hooked up with his production partner Andy Carrick. A chance meeting lead the two to kick around some ideas in the studio. 4AM’s ‘Prelude to the Storm’ EP was the result. A quick tout round the (predominantly progressive) house labels Glasgow had to offer got plenty of blank looks. McKay had more confidence in the release and borrowed £2000 to press up his own copies. Within a month the first 2000 were gone and his fax machine was jammed with reactions from a-list djs like Andrew Weatherall, Roger Sanchez, Terry Farley, Ralph Lawson and Deep Dish all asking for more.

From 94-96 McKay and Carrick recorded 8 EPs for their Muzique Tropique imprint and a one-off single for Junior Boys Own imprint Jus’ Trax. The list of djs that checked their releases now included Romanthony, DiY, Chez Damier, and Danny Tenaglia (who called McKay on New Years Eve 1996 to tell him that his ‘Urban Revolution’ cut was going to be the biggest record at his party that night).

By 1997 Glasgow was home to some of house music’s finest new talent. From DJ Q to Deep Sensation the city was filled with 4/4 futurists and they were ready to take their music to the bigger stage. At the same time, McKay’s work as in-house house music expert at the fledgling dance magazine Muzik had put him in touch with like-minded artists such as Mateo & Matos, 16B and House of 909. Pulling all this together he started Glasgow Underground with a cut he made with Omid 16B as Sixteen Souls’ called ‘Late Night Jam’.

Like Paper Recordings and Nuphonic, Glasgow Underground was one of the British labels at the time that saw real album potential in house music. The label was defined by its long-players from the likes of Romanthony, Mateo &
Matos and the Idjut Boys and initial dj plays soon made way for some serious column inches and worldwide recognition.

As the label began to make waves around the globe, McKay’s dj-ing schedule took a serious upturn. From his background in Glasgow’s sweat-boxes he now found himself jetting around the world to headline at house clubs like Food (Belgium), Propaganda (Moscow), Skansen (Oslo), Release (Los Angeles) and the Rex (Paris). He continued to promote events in his home city and was the first promoter to bring the likes of Francois Kevorkian and Deep Dish to Glasgow.

In 2002 a demo arrived in the Glasgow Underground office from a producer, originally from the Isle of Skye, now living in Glasgow. His name was Myles Macinnes and one of the tracks on that demo became the title track to Mylo’s 2004 album, “Destroy Rock & Roll”. Not wishing to lose such a talent to a major label in the same way that Daft Punk had left Soma for Virgin, McKay made Macinnes a partner in the newly established Breastfed label. In addition to Macinnes, McKay asked local club promoter Duncan Reid to join the label and between them they made Linus Loves’ 2003 hit “Stand Back” – the income from which set the label up with enough funds to launch Mylo as a global dance star.

As well as running the label, McKay mixed and co-produced “Destroy Rock & Roll” and programmed, mixed & produced all the Linus Loves output from 2003-2005. By 2006 “Destroy Rock & Roll” had sold 300,000 copies in the UK, spawned 5 top 40 hits including the #3 “Doctor Pressure”. Internationally it achieved gold status in France & Australia.

Whilst Mylo was between records McKay set up the Prestel label and signed Cobra Dukes (now Visitor) & Dada Life and in 2007 signed Grum and set up the Heartbeats label. Grum – one of the first acts to be hugely exposed on the blogosphere – has since recorded 5 huge club single and the album “Heartbeats”, all of them huge favourites with Radio 1 in the UK whilst his album (licensed to Ultra) was US itunes dance album of the year.

In 2011 with Grum between albums (and Mylo still between album) McKay relaunced the Glasgow Underground label with Mash’s spooky disco classic “Somebody’s Property”.